Book: The Way We Never Were 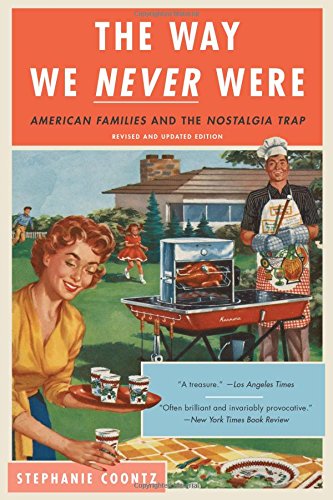 Hearing about how Donald Trump wants to "make America great again" for the last year and a half made me think when was America great? Since the 80s, conservatives have loved to talk about the decline in "family values" and how all social and economic problems stem from the lack of "traditional" families, usually referencing the 1950s Leave it to Beaver sitcom-style family as their model of what a good, decent traditional family should be. I suspected that such a family never really existed other than on TV, and I decided to read this book, "The Way We Never Were: American Families and the Nostalgia Trap" by Stephanie Coontz to get another opinion on this issue.

The book basically concludes that the "traditional nuclear family" consisting of a working father and a stay at home mother was a relatively recent invention, only really existing in the years after WWII, and that contrary to popular nostalgia of the 1950s as a period of good, decent, family values the rates of poverty, alcoholism, child abuse, domestic violence and marital dissatisfaction were significantly higher than they were in the early 1990s, when the book was written. In the 1950s wife beating was not even considering a "real" crime and battered wives who saw psychiatrists were often counseled to stop provoking their husbands.

During the Reagan era you would often hear that social and economic problems were due to the end of the traditional family - as seen in rising divorce rates, lower marriage rates, and the rise of out-of-wedlock births. In fact the rates of teenager girls having children was higher in the 1950s than in the 1990s, although back then many teenage girls who got pregnant would either be forced to marry or live with their parents, in which case their children would not be counted as being raised in a single parent home.

Ms. Coontz makes a case that the social and economic issues of the 1980s were in fact directly related to rising income inequality and poverty caused by the deregulation and privatization of the Reagan years, which tie in to the idea of a nuclear family as the basic unit of society. In the past extended familes were much more common and communities and social ties were stronger. It was really only in the post-war years that the self-contained nuclear family which only cares about itself became prevalent, and the idea was really promulgated, largely by advertisers, who wanted to sell goods to housewives, and mass media, which wanted to have the least objectionable programming to appeal to the widest possible audience and thus appeal to advertisers. She argues that the privatization of the family was just part of a wider trend of the economic privatization of everything which is still ongoing. Divorcing families from their communities and their wider social ties was just a manifestation of the emerging neoliberal economic agenda where profit is the driving force behind and measure of everything.

One story I found very interesting in the book was about how different cultures have different approaches to things like family. When the Europeans arrived in America many of them were aghast as the way the Native Americans viewed family and marriage and women. The Native American women were free to do as they wanted whereas the Europeans were the property of their husbands or fathers and were very tightly controlled. The Europeans were taken aback by the fact that the women could make their own decisions and sleep with whomever they wanted. They asked the Native American men how they could know if their children were biologically theirs if they didn't enforce monogamy. The Native Americans replied that while the Europeans only loved their biological children the Native Americans loved all the children of their tribe. I would argue that, as Hillary Clinton said in the 1990s, "it takes a village" to raise a child, and Ms. Coontz provides evidence that this is in fact true, and that children who are part of a wider family than just their parents often turn out better than those raised in isolation with only their biological family.

The bottom line of the book is that the yearning for the "traditional" family of the 1950s is a trap, and distracts people from thinking about real problems and solutions, by imposing an unthinking nostalgia for a past that never really existed while ignoring the numerous problems that existed in that past. To answer my original question, the America that some people so desperately want to go back to only existed on TV and in their imaginations.