The Origin of Consciousness in the Breakdown of the Bicameral Mind

I just finished reading The Origin of Consciousness in the Breakdown of the Bicameral Mind by Julian Jaynes. I had read about this book many times over the years, but never got around to actually reading it myself until recently. I had high expectations for this book and I was not disappointed. Richard Dawkins said that "It is one of those books that is either complete rubbish or a work of consummate genius, nothing in between!" I personally disagree with this statement. While I don't believe that the book really proves its hypothesis, I still think it is a work of genius. 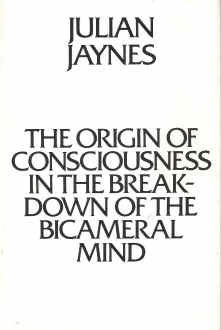 The central hypothesis of the book is that what we call "consciousness" is a relatively new phenomenon, and that not too many thousands of years ago humans had a very different type of consciousness. Specifically they did not reflect on their thoughts and actions and decisions as we do now, but acted more as animals - reacting to stimulus and their environment. In times of stress, where decisions required more deliberation, rather than thinking through their options and the consequences of their actions, they hallucinated voices which told them what to do. These voices were thought to have come from supernatural sources. While Jaynes makes a very compelling circumstantial case for this, I don't really feel he gives any direct evidence of this, and such evidence may not in fact be possible given the fact that the thousands of years have elapsed.

There are a couple other interesting hypotheses in the book. One that I had reached on my own is that consciousness is a manifestation of language. I believe that what we call consciousness, which is really having a voice in our head that we know is our own, is a side effect of language and specifically abstract language. I don't think consciousness is necessary for language or communication, but I think it is necessary for abstract language and thought, and I think it evolved with the capability for abstract thought, such as evaluating past decisions and planning for the future. I have no evidence for this, that is just my own opinion.

Most people think that the voice in our head is in control of our decisions and rules our minds like an all-powerful dictator. They think that without this voice making decisions we would not be able to function at all. The thing with this argument is that it is the voice making it. What most people think of as "I" IS the voice in their head. Jaynes uses an analogy of a flashlight: if you ask a flashlight to look around the room and see where there is no light it will tell you that there is light everywhere, because everywhere it looks it shines light. In reality the room is dark everywhere that the flashlight is not looking.

Because we identify the voice in our head as being "us" it is unable to recognize anything that is not that voice. In reality we can mostly function without this voice, without consciously thinking through every decision that needs to be made. As an example consider driving - it is mostly automatic, you see something in the road, you swerve to avoid it. If every decision had to be consciously thought through and consciously made we would all be very, very bad drivers.

Experiments show that your brain can recognize and use information well before we become conscious of it. An example is given by Jonah Lehrer in his book "Proust was a Neuroscientist." He describes an experiment where a subject has two decks of cards to choose from - each card either awards an amount of money or costs an amount of money. But the two decks are not equal - one will yield better results over the long run than the other. The subject will unconsciously begin to pick from the latter deck, the better strategy, well before they become conscious of the disparity between the two decks. Another example of your brain using information which you are not conscious of is blindsight, where people are not aware of seeing anything, but their brain responds to visual stimuli nonetheless. For example a person can't describe the room they are in at all, as far as they know they can't see it, but if you put a chair in front of them they will walk around it.

The point of all this is that our brains can function largely independently of our conscious thoughts, but people still cling to the idea that the voice in their heads make all the decisions and are in control. In my opinion the decisions would largely be the same without the voice (although of course not always), and that the voice mostly just rationalizes decisions your brain would have made anyway. Disagreements between the voice and the decisions often manifest as cognitive dissonance, and the usual result is that the voice updates it's evaluations to match what you were going to do anyway. I think the realization that we are far more than just the voice in our heads is a big part of what Buddhist teaching has to offer.

The reason I go into depth about all of this, which is tangential to the book, is because Jaynes is completely unafraid to challenge preconceptions which are so deeply ingrained in people that they cannot even conceive of alternatives, and often become angry when alternatives are suggested. That is the genius of this book. Jaynes takes ideas which are commonly accepted as a priori facts by most people, and examines them and finds them lacking, suggests alternatives, and backs those alternatives up with evidence from literary works and archaelogical findings. While he makes a very good circumstantial case supporting his theory, I don't believe he offers any real direct evidence for it.

While I don't buy his theory about hallucinated voices being the precursor to what we now call "consciousness," he did convince me that what we call consciousness is a relatively new phenomenon, and that in the not-too-distant past (evolutionarily speaking) our brains functioned in a very different way than they do now. However, I still greatly enjoyed this book, if only for his audacity in taking concepts that most people regard as fundamentally and inherently true, and suggesting that maybe they are not quite as set in stone as they are thought to be.

If more people were unafraid to throw out preconceptions that don't really have any evidence supporting them, and felt free to think of alternative theories, the world would be a much different place. Even if theories turn out to be wrong, it is still important to consider and test them. For thousands of years people thought the universe revolved around the Earth because that's what religion said. Then Copernicus suggested that the universe revolved around the Sun. That turned out to be wrong, but it was still an improvement over the old model. This book has played a similiar role in making people reconsider what consciousness really is.