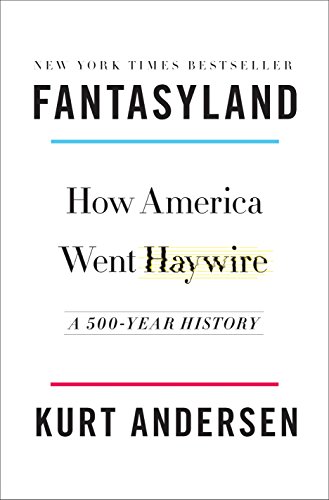 The subject of this book is something I think about quite a bit - how Americans will pretty much believe anything, no matter how ridiculous. It may sound somewhat similar to "Bunk", but the books are completely different. While "Bunk" focuses on the hoax as a sort of benign joke, this book is more about how people are completely indifferent to facts of any sort.

The seed was planted with the Reformation. The main idea was that rather than just believing whatever we are told, we should think for ourselves, in this case that specifically meant read the bible yourself and draw your own conclusions rather than just believe whatever the Catholic church says. This is a very good thing - people need to think for themselves, but over the intervening hundreds of years that seed has bloomed into the current philosophy of "I will believe whatever I want and facts be damned." The book traces how that transformation happened.

One import milestone was the colonization of America, which gave people whose beliefs were not tolerated in Europe a place to go where they could be with other like-minded people. Again, this is not necessarily a bad thing, except that a lot of those people were Puritans whose peculiar philosophies largely influenced the new American culture.

Another turning point was the 60s in the US, when anti-establisment sentiment started making any facts that are said by "experts" suspect as elitist. This, combined with the New Age stuff that became popular at the time, really was the turning point when the "reality-based community" was overwhelmed by the fantasy-based community. It should be expected that when people discover they have been lied to by the government, they should start to question everything the government has ever told them, and again I don't really see this as a bad thing. I personally believe that one should not believe anything one is told unless one confirms it independently or can verify it on one's own. However the difference is that my way involves confirming alleged facts, while the American way is mostly to disregard them if they contradict your opinions, no matter how reliable a source they come from.

I have been watching this series on YouTube called "Retro Report" which is about old scandals. The funny thing is that most of the things that people got worked up about - be it Dungeons & Dragons, Satanic pre-schools, the "dangers" of vaccination, or "super predators" - turned out to be completely baseless. But even when the mistaken beliefs are confirmed as being false people don't really care - they still continue to believe them. A lot of this is attributable to cognitive biases - specifically the availability heuristic - which says that if you hear about something a lot - like someone who's child has autism and was also vaccinated who believes the latter caused the former - you will tend to believe it no matter how much evidence contradicts it.

Although based in psychology, this phenomenon is somehow uniquely America. Living in Europe I find most people to still be a part of the reality-based community, of course there are conspiracy theorists and such everywhere, but the distrust of experts and science and evidence seems to originate in the USA. This is an extremely worrisome trend, and this book is a very interesting exploration of it.