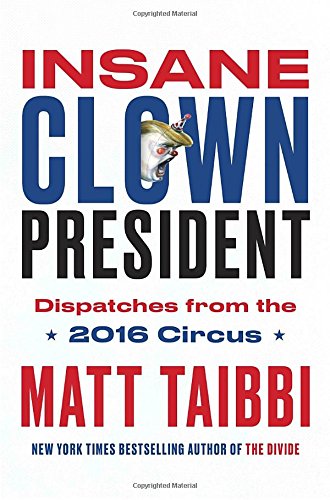 When I first heard of this book I assumed it was an anti-Trump gimmick, designed and written solely to sell copies by capitalizing on the anger at Trump's election. It wasn't until I discovered that the book was written by Matt Taibbi that I actually decided to read it. Matt Taibbi is the author of what I consider to be one of the most important books on politics in this century "The Great Derangement," which analyzes recent fringe conspiracy movements in the light of what US politics have become. In "The Great Derangement" Taibbi investigates one right-wing movement - apocalyptic religious fundamentalists - and one left-wing movement - 9/11 Truthers - and concludes that both stem from the fact that the American political system has become so corrupt and so removed from any real democratic influence. Rather than getting angry that the government acts mostly in the interest of the multinational corporations and monied interests who fund the politicians and agitating for any real change, people instead focus on fringe conspiracy theories and become obsessed with the coming of the rapture or trying to figure out who was "really" behind 9/11. In the meantime the political parties promote the idea that they are idealogical opposites by getting the people to focus on and get angry about social issues like what bathrooms transgender people can use, gay marriage and abortion while both parties take jam through their agenda which benefits the very wealthy and the multinationals. But enough about that book...

This book seems styled after the campaign work of Hunter Thompson and consists of a series of dispatches written by Taibbi during the campaign of Donald Trump. I was pleased to see that the dispatches were printed as they were originally written and not updated with the benefit of hindsight. The fact that after the release of Trump's comments on grabbing the genitals of women, Taibbi writes as if the campaign is over, as most people thought at the time, makes the fact that somehow Trump went on to win even more shocking and upsetting.

Even Taibbi's writing style seems very reminiscent of Thompson - full of bizarre and sometimes obscene descriptions of things - like describing Donald Trump's speeches as "turd clouds". Like Thompson's work, this book is fun to read, yet inside the florid metaphors it contains deep and profound analyses of the state of politics and the world. The only gripe I have with the book is the title, which to me seems more appropriate to tabloid journalism than to a serious political work like this. Even so, I highly recommend this book, and also highly recommend "The Great Derangement."