The Rise and Fall of the Third Reich - by William Shirer 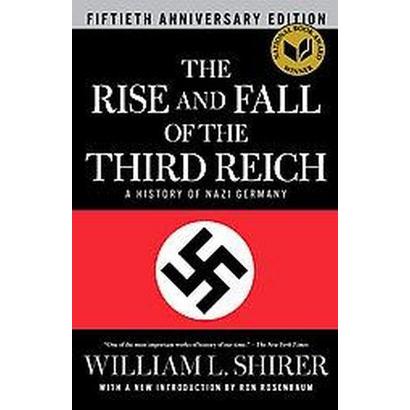 My grandfather was always obsessed with World War II, especially reading about Nazi Germany. He was a doctor in World War II although he was stationed at West Point and never went overseas. We used to make fun of him because every Christmas he would get a huge stack of books about Hitler and such. As I've grown older I've come to maybe not share, but at least appreciate his obsession, and I have been known to watch lots of documentaries on TV and Netflix about World War II.

Amazon Prime said I could read this book for free, and so I did. It was quite long but written in a very accessible way. Mr Shirer was a journalist stationed in Germany and other parts of Europe before and during WWII so had a first-hand view of the rise of Nazism. Before reading this book I never really appreciated the difference between a journalistic style of writing and a historical one but, especially having read this book shortly after having read some of Robert Caro's biographies of LBJ, the difference in styles really jumped out at me. On the plus side the journalistic style makes the book more engaging and easier to read. On the down side Caro interjects a great deal of personal opinion into his recounting of the Third Reich. He repeatedly refers to Hitler as "the demonic dictator" - and even if I happen to agree with that I don't know if it's appropriate to use that kind of language in a historical document. It's obvious he feels very strongly about the Nazis as he does things like refer to Goering's weight where it bears absolutely no relevance to the matter being discussed, and in general wastes no opportunity to throw in little ad hominem asides about anyone and everyone he has a negative opinion about.

One notable example of this is when discussing how many early Nazis were homosexuals, many of whom were later executed by Hitler, he feels compelled to discuss their "disgusting perversions" and make other such disparaging comments, although it adds absolutely nothing to the book. This was quite shocking to me, but I let it go as the book was written in 1960, which was a very different time from today.

The other bias which really disturbed me was Mr Shirer's negative overall view of Germany and the German people. He seems to think that Nazism was the result of some inherent flaw in the German national character rather than the result of a manipulative person taking advantage of a desperate economic and political state in the 1930s. In the afterword, written in 1990 as Germany was preparing to reunite, Shirer seems to expect that a reunited Germany will inevitably try to dominate the rest of Europe by force. Interestingly, the preventative measures he prescribes seems to be exactly what has occurred. He suggests that embedding Germany into a united Europe would prevent her from exerting military ambitions in the future.

In summary, this was an interesting and engaging book which gives a brief (if 1,200 pages can be considered brief) synopsis of Germany under the Nazis. Unfortunately it's author was a very opinionated and bigoted man, who's biases are constantly revealed even when they bear no relevance to the text. It is very clear he was more of a journalist than a historian. I will grant that when the book was written anger towards Germany over WWII was likely still very pronounced, and his attitudes maybe a bit more socially acceptable. This is an interesting introduction and overview of the history of Nazi Germany, but in no way should it be considered a serious historical work.