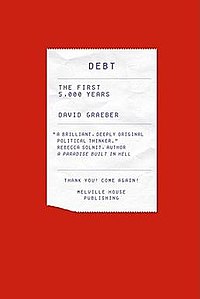 My wife has been watching a TV show from the UK called "Can't Pay We'll Take It Away" which is about people who go to collect debts from people, and if they can't pay they take their stuff. They are similar to repo men, but they work for the court rather than the lender and they won't just repossess the item the debt is against - they'll take anything at all to sell for pennies on the dollar and use the money against the debt.

My first reaction to hearing about this was that this didn't really make sense. I thought that interest was supposed to be compensation for the risk of not being re-paid, and that this did not make sense. If you can go and take any possessions of a debtor and sell them to repay yourself there is no reason to not loan money to anybody and everybody. Then I thought about how the current debt system reinforces the inequality inherent in capitalism in that people who have to borrow money often end up re-paying it forever, making the lender or credit cards or whoever a huge amount of interest.

My next reaction was to go out and get this book, which had been lingering in my "To Read" list for quite a long time. The book, written by an anthropologist, examines human societies in terms of debt and, more broadly, the concept of money in general. The book presents exactly the type of arguments I like - it takes common assumptions of the type we are taught in school as unquestionable facts, dissects them, applies facts to them, and finds the assumptions lacking. The first such assumption is the origin of money. In business school I was taught that before money people had to barter. Say I have a chicken and I need new shoes - I would have to find someone who has shoes and needs a chicken. If the people who have shoes don't need chickens I am out of luck. Money was the solution to this problem - by acting as a common denominator for everything I can sell my chicken to someone who needs a chicken and use the money to buy shoes from someone who has shoes. Graeber says that this is not supported by any facts - the evidence indicates that people dealt with such situations with a crude system of IOUs. At the time communities were much smaller and people probably knew everyone in their village, so someone who had shoes would give them to me, and then later I might give them a chicken when they needed it.

Imagine that your neighbor comes over to ask to borrow an egg. Do you ask for money for it, do you ask for something of equal value in return? You will probably give him the egg and expect that if you ever need an egg in the future he will do the same for you. Now imagine that you know everyone in your town as well as you know your neighbor, and that your town is largely self-contained. According to Graeber this is how commerce worked for a large portion of history - he refers to it as "everyday communism."

While neoliberal capitalism is based on the assumption that everyone is out for themselves, specifically to get as much money as possible, everyday communism is based on the assumption that people will help each other without being forced to. While this would never work in today's world, according to Graeber it was the dominant system of commerce for most of history.

Most economics textbooks assert that the first system was barter, which led to money, which led to the creation of debt and credit. Graeber claims that this is not supported by any evidence and believes that debt and credit of type described above variety predated money and barter. While his theory seems more likely to me than the standard economic theory, it seems there is no conclusive evidence supporting either version, so who can say?

The book also covers a variety of other topics such as the origins of coinage and paper money, the origins of credit, the role of precious metals and slavery, and the effect of warfare and government on all of these things. Graeber's theories are a bit more complicated than the standard assumptions, but at least to me they ring truer than the accepted wisdom. Especially interesting to me where the explorations of "human economies," in which the common denominator was people rather than money, viz the thing in which everything else was measured was human lives, not dollars.

The big takeaway from this book is that civilizations have struggled with debt for thousands of years, with the pattern being that the poorer people have to borrow money from the wealthy to live, when they can't pay it back they have to work or become slaves for the wealthy, and this continues until something major happens - either a revolt, a crisis, the cancellation of the debts or some other cataclysmic event. I believe that today we are nearing the end of such a cycle. As inequality grows we are starting to see some unrest on the part of those who do not have capital, where this leads only time will tell.